When it comes to automation and manufacturing ISA-88 or just S88 is inevitable.

It is a standard for published by The International Society of Automation (ISA) that sets out models and terminology addressing batch control. The standard was published in an attempt to standardize and thereby making it easier for automation suppliers to integrate, communicate and configure batches. It is adopted by Europe as IEC 61512-1.

Today, the standard is used by most manufacturers and automation suppliers that deal with batch control. Especially productions of food and medicine utilizes if not the whole, then at least parts of the standard to keep track of their batch production.

In this article I will try to explain what S88 and batch control is and why this particular standard has become so widely used.

What is Batch Control?

One of the first things you will find in the standard is the definitions of terminology. Among them, also a definition of what batch process control is.

A process that leads to the production of finite quantities of material by subjecting quantities of input materials to an ordered set of processing activities over a finite period of time using one or more pieces of equipment.

Of course this is just the official definition, and it might not seem very descriptive if you’re new to batch control. I like to explain batch processes by looking at the three different ways of manufacturing:

Mass production is a continuous production of a standardized product. Take a car producer for example, where cars are produced in a constant flow from an assembly line. On the other hand is job production which is the production of a custom product, often in very small amounts.

Right in between these two is the batch production method.

What is a Batch?

A batch is simply a limited quantity of goods or material produced in a single manufacturing run. A batch process is the production or processing of a batch.

In order to describe the batch process control S88 puts out three models: Every batch process can be divided into process stages. Process are in series (after each other), in parallel (simultaneously) or a combination. Each process stage typically operates independently from other process stages. A sequence of physical or chemical changes to the material is usually the result of a process stage.

Every process operation can be divided into process actions. They are the lowest level of the process model. The actions needed to complete the operations.

In fact, the physical model is the foundation for all the other ISA-88 batch control concepts like processes, recipe management etc. All these other concepts has to be linked to some equipment, and that requires you to define them.

The physical model is a hierarchy of different levels. Lower levels are combined to form higher levels. Two equipment modules together are a unit or three sites are an enterprise as examples. Each level in the S88 physical model either may or must contain one or more sub-levels.

At the very top of the model is the enterprise level. It may contain one or more of the lower levels. Here we’re usually talking about a company or a department that decides which products will be manufactured. It may contain all of the underlying levels.

A logical, physical or geographical group determined by the enterprise. The boundaries of a site is decided by business criteria.

Example: HQ and factory in Manchester

A logical, physical or geographical group determined by the site. Just like the site level, the boundaries of the area level are decided by organizational or business criteria.

A process cell is everything required to process or produce a batch. It is defined as a group of logical connected process facilities in on area. Each process cell must include units and may include equipment modules and/or control modules.

Units are one or more major processing activities. They are made up of equipment and control module.

The procedural control model describes how the batch process should be carried out. In the model you will find that the procedure has three subordinates, unit procedures, operations and phases. The procedure describes all the equipment-oriented actions which in an ordered sequence will carry out the batch. This is the model that describes how we’re going to make our batch with our equipment. As you will see later these three models are tied together. So when you’re describing procedures with the procedural model, it is in relation to your equipment described with the physical model and your processes described in the process model.

At the level below you will find the operations. They are by the standard defined as ordered sets of phases. When a change (physical or chemical) happens to the material you can call that an operation. At last, an operation combined with a unit is what will carry out a process operation.

The lowest levels in the procedural control model are the phases. You can even divide them into smaller pieces if necessary. A phase can give command and cause actions like enabling/disabling states, setting/resetting and changing alarms, controller constants etc. I’ll explain what states are later in this article. You can combine a phase with both a unit or an equipment module to carry out a process action. Relationship between the three models from ISA-88

Beside the three models ISA-88 also defines some batch control concepts. Although you have tied your equipment to your procedures, you do not always want procedural control of the equipment. Sometimes you just need some manual or basic control of the functions.

For this reason ISA-88 introduces three different types of control.

Basic control is all about establishing and maintaining a state of the equipment and process. More on the states soon. But what you should know here is what you can control and how basic control responds to certain conditions. This is what the standard defines basic control:

So, even though you’re only establishing or maintaining a state, you can still do certain types of control, monitoring etc. Basic control of elements can also be activated/deactivated by elements in procedural or coordination control.

This type of control is essential to batch production. You will use procedural control to perform a batch process with your equipment.

The procedural elements that controls the equipment-oriented actions comes from the model – procedures, unit procedures, operations and phases.

Coordination and allocation of resources and equipment to batches are common algorithms to use here.

Both procedural and equipment elements can have modes. Modes defines how the elements operate and respond to different commands. With procedural elements they also define how the procedure will continue and who can affect the flow if it.

In the standard three modes are proposed:

Procedural elements can be in any of the three modes, while equipment elements can only be in either automatic or manual.

The behavior and allowed commands of the different modes are defined as below. You should also notice that depending on what control type you’re using, the modes have different behaviors.

Just like modes, procedural and equipment elements can have states. While the modes are defined by behavior, states are defined by the current condition of the element. A motor for example may be in the state of e.g. running or stopped.

Many states are defined in the standard and some of them are more specific for components. A valve can have the state of 30% open, while a motor can’t. On the other hand, a motor may have the state 50% speed, which is generally not possible for a valve.

Here are some of states as defined by the standard:

As you can see some of the states look awfully a lot like each other. Some states are final states, some are quiescent states and some are transient states.

All the states that ends with “ing” are transient states. A state is transient means that the state is temporary. As soon as the state is completed the state will change to a quiescent or final state. Think of stopping as an example. Before the procedural element is actually stopped it is in the state of stopping.

Before we dig deeper into the transitions of states we have to look at commands.

The commands are what initiates transition of states. An example of a command is the stop command. When that command is giving to a procedural element in running state, the state will change to stopping. Same goes with the start command which may initiate the change of state from idle to running.

There’s a certain order to the states or to be more precise, which states can change to which. In some way it also makes sense, that you can’t change state from idle to stopping. An illustration of this is called a state transition matrix or diagram. You and your team can use the diagram or matrix to find the relation between your states, commands and transitions.

Below is an example of such a diagram. Notice the difference between final states, quiescent states and transient states. Most important here is how you handle these exceptions. One exception handling could be to put change the state of a valve to idle or faulty if a malfunction happens. This might affect the whole batch process and it should be decided, whether the batch can be finished or not.

You can read more detailed about exception handling and S88 here. 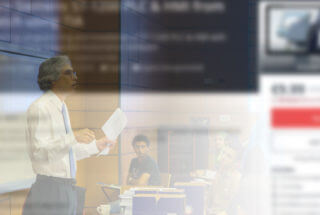