How To Make An Ethernet Cable (Crossover & Straight-through Method) First, some information about the Ethernet cables, connectors and wiring. If you are already familiar with this, you can go straight to the guide:

How to make an Ethernet cable ⇓.

Disclosure: Some of the links in this post are affiliate links and if you go through them to make a purchase I will earn a commission. I link to these products because of their quality and not because of the commission I receive. The decision is yours, and whether or not you decide to buy something is completely up to you 🙂

What is an Ethernet cable?

An Ethernet cable is the cables used to connect devices in an Ethernet network. The Ethernet cables are used for wired data transmission between the devices. The Ethernet is a series of standards for communication between devices like computers. They can even be really good for wiring analog PLC inputs and outputs, because of the twisted pairs and the shielding.

The Ethernet networks use twisted-pair cables for wired communications. Twisted pair cables are cables where the wires inside are twisted along the cable in pairs. The reason for twisting the wires in pairs is to cancel out any electrical noise or electromagnetic interference (EMI) from outside.

Networks are usually vulnerable to noise. Especially when the commutation is over longer distances. Twisting the wires in pairs is done to do differential mode transmission on the signals to equal out the noise. There are several types of twisted-pair Ethernet cables are available. The UTP, STP, and some others. They are all different and used in different environments depending on the level of electrical interference.

UTP means Unshielded Twisted Pair. These cables are without a shield around the wires or the wire pairs. UTP cables are sometimes used for patch cables in-home or office environments.

Besides the shield, the foil is also used in twisted pair cables. Foil or FTP (Foiled Twisted Pair) is a layer of metal foiled around either all the wires, all the pairs of wires, or both.

Twisted pair cable comes with different wire thicknesses. The usual ones are 22 and 24 AWG. If you are going to make longer Ethernet cables you should use twisted-pair cables with the highest AWG number. As the cables get longer, so does the resistance. If you use thicker wires the resistance will be lower. Remember, the higher the resistance, the slower your network connection will be.

The cables used for making Ethernet cables are divided into categories. Each category is defined by the available bandwidth and used for different purposes. For example, category 3 or cat3 cables are used for telephone connections. All the cable categories for twisted pair cables are defined in ISO 11801.

The Ethernet cables this guide aims for are the ones using RJ45 connectors in the ends. They are the ones you can make by yourself. For that, you will be using one of the following cable categories.

Getting a little better with faster transmission speed (1000Base-T).

This category is a subcategory or an extension of category 5. This category has almost the same specifications as cat5, except for some limits in for example the return loss. This makes faster network speed available. That is why cat5e cables are faster than cat5 cables.

Now, we are there! Suitable for up to 10GBASE-T.

You can see a comparison of the cable categories 3 to 7, which are used for Ethernet. You can learn more about CAT 6 cables here.

The connector used for twisted-pair Ethernet cables is called RJ45 connectors. RJ45 is the common name, but they can also be referred to as 8 Position 8 Contact or 8P8C.

RJ45 is a connector with 8 pins. One for each wire in a typical Ethernet cable with 4 pairs of wires. The RJ45 connector is a one-way connector. This means that on top of the connector there is a small you can only connect it in one way. Here is how the RJ45 pinout looks: When you have crimped the connector there is no way back. So the wires better are in the correct place, or you’ll have start over again. Make sure to have some connectors for practice.

The first type of RJ45 connector you can use to make Ethernet cables are the UTP connector. As with the cables UTP simply means shielded twisted pair. This is because the UTP connectors have no shield, and are entirely made out of plastic.

The RJ45 UTP connector is the simplest one to work with since you do not have to worry about the shield. You can use it with both shielded and shielded twisted pair cables.

100 of these UTP connectors can be picked up for a great price on Amazon. The pins in an RJ45 connector are made with a sharp edge to cut into the wires and thereby making an electrical connection. A pack of 100 costs can be purchased on Amazon. To make the electrical connection we need to insert the wires in the RJ45 connector and press down the pins. This is done with the RJ45 crimp tool. The tool will also apply pressure to the opening of the connector, to secure the cable.

You can pick up a quality (but cheap) RJ45 crimp tool here on Amazon. Or you can read reviews on the best RJ45 crimper on the market. The wiring of Ethernet cables can be done in several ways. Two of the most common ways are by following the T568A and B standards. The reason for using these standards is that the signals will run in the pairs of wires; in a way that takes advantage of the noise-canceling effect of twisted wires. Using the standards also makes it very easy to make a crossover Ethernet cable.

The first wiring standard is the T568A. It is also referred to just as A. Each wire color has its own pin number position.

Here is how the T568A wiring to an RJ45 connector looks like: 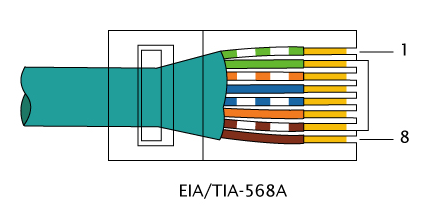 T568B is the other standard. The difference from the A standard is that the orange and green pairs are swapped. You can see the T568B wiring below: 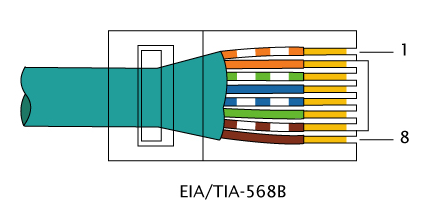 Ethernet cables can be made in two different ways. The first way is called straight-through and is the simplest one. Straight-through means that the cable is wired equally in both ends. The wires go from one pin number to the same pin number.

To make a straight-through Ethernet cable you can use either T568A or T568B. As long as you use the same standard in both ends of your cable.

If you are extending an existing network, you should always check which wire standard is used for straight-through cables and continue that. Also, you should be consistent in your choice, and so using the same standard for all your cables.

The second type of cable you can make is the crossover Ethernet cable. Ethernet crossover cables are made for one special reason. Namely to swap the wires used for sending and receiving data.

Similar devices have the send and receive at the same pin numbers.

Because the difference between the A and B standard is two swapped wire pairs. The exact pairs used for sending and receiving data.

How to make an Ethernet cable

There are some things in life that are too complex (or dangerous) to make yourself – such as a whole house surge protector or electrical circuit tracer. An ethernet cable is not one of these things.

You don’t need an electrical engineering degree or an electrical apprenticeship to make one either – it’s a lot more simple than it looks!

Don’t believe me? Well before you make up your mind, take a look at the video tutorials below or read the step by step guide below on how to make an Ethernet cable.

The first video is on how to make an Ethernet cable using RJ45 UTP connectors:

The second video is on how to make an Ethernet cable with shielded RJ45 connectors or STP connectors.

Remember, it can be tricky in the beginning, especially with the thick wires. But practice makes better, and eventually, you will even start to enjoy making Ethernet cables.

If you enjoyed my guide on how to make an Ethernet cable or if you have any tips from your own experience, don’t hesitate to comment below or write to me.