Have you ever used a specific thermocouple type in a project? If you have worked on a project with thermocouples, we would love to share images of that. Feel free to comment below or contact me.

If you are already familiar with thermocouples you can skip straight to the overview of all the thermocouple types:

What Is A Thermocouple?

If you haven’t seen a thermocouple before, here are some examples of how thermocouples can look like: Thermocouples can look very different. Some of them are barely just wires, while others have metal houses to protect them from heat, EMI, and other types of noise.

Thermocouple applications – Where do I use a thermocouple?

As you can see the thermocouple is often used for industrial purposes. This is due to the fact that they work best in higher temperatures, and industrial automation often requires temperature measurement for high temperatures. Thermocouples can even be used for rocket science. NASA uses thin-film thermocouple (PDF) to measure temperatures at the engine surfaces.

But you will also find people using thermocouples for hobby projects. Some times you need to measure higher temperatures even in small projects. In those cases, it is common to use cheap thermocouples to use with for example the Arduino or the Raspberry Pi platform. These thermocouples cost as low as $10.

The Seebeck Effect: Thermal Gradients And Voltage Gradients In Conductors

Take a look at this simple example of an electrical conductor. To illustrate how the thermoelectric effect affects the voltage over the conductor: Seebeck effect: When the thermal gradient is applied to a conductor a voltage gradient will be generated.

When you apply this temperature difference of 100 degrees, we say that there is a thermal gradient (change of temperature) over the conductor. According to the Seebeck effect, a thermal gradient in a conductor will generate a voltage gradient. This generated voltage is very small and often measured in microvolts – μV. This is one of the reasons thermocouple temperature ranges are for higher temperatures.

You can even calculate the voltage gradient, by using the Seebeck formula:

The next principle you need to understand is the junction of two conductors. This is the principle of how thermocouples work. When you connect two conductors with different thermoelectric properties, we call the connection a junction.

The thermocouple takes advantage of exactly this difference in material properties. You can take a look at this principle drawing of a thermocouple to understand this better: As you can see the thermocouple has three junction points. A junction between the two conductors. And two junctions between the conductors and the wires to the voltmeter.

But do we really measure the temperature at the hot junction point here?

Cold Junction Compensation Of The Thermocouple

To get to the real measured temperature at the hot junction, you need to compensate for the reference temperature. This is called cold junction compensation and can be done in a couple of ways. Thermocouple Accuracy And Limits Of Error

Is the thermocouple an accurate temperature sensor? Thermocouples come in a series of standardized types. Each of these thermocouple types has its own name – a letter – and its own specific properties. The types of thermocouples are made with two specific conductors with different thermal effects.

All these thermocouple types are also standards in both IEC, BS, and ANSI, just with different wire colors, etc. More about the thermocouple wires and connectors later in this article.

Before listing all the thermocouple types, let me introduce you to the most common types of thermocouples. These are the types I have seen the most out there. Most of them used for industrial purposes.

The conductors used in the K thermocouple are chrome and aluminum which are both metal alloys. By combining these two materials this thermocouple type has a sensitivity of 39 µV/°C. For each one degree Celsius increase in the temperature gradient, the voltage will increase by 39 µV or 0.039 mV.

ITS-90 Table For Type K Thermocouple

The sensitivity of the K type thermocouple can be explored further in the ITS-90 tables. The ITS tables are made by the National Institute of Standards and Technology or NIST. They are also called reference tables and are made for each thermocouple type. In the tables, you can see the thermoelectric voltages as a function of the temperature and the reference junctions at 0°C.

The Curie Temperature In The K Type Thermocouple

Each of the thermocouple types all has a standard color code for the wires and the cable. The tricky part here is that each type of thermocouple has different cable- and wire colors depending on what standard you use. Generally speaking, there are 3 sets of standards for this.

Keep in mind that you don’t have to remember all these color codes for thermocouple wires. You can always look at a thermocouple type chart like the one below. The thermocouple connectors all have standard colors according to both IEC and ANSI. According to IEC K type thermocouples has green connectors.

Thermocouples are a great choice for measuring temperature. Especially in very cold and very hot environments. They have a wide temperature range and they are quite robust. Since they are merely just two wires, sometimes with protection, they can withstand a lot of noise and vibrations. Besides that, they are relatively linear sensors. This makes it easy to work with. The signal can with ease be transformed into a 4-20 mA signal. This is helpful when you want to connect to an analog PLC input.

Do you have experience with thermocouples? Maybe even something you want to add to this article. Feel free to join the discussion below. 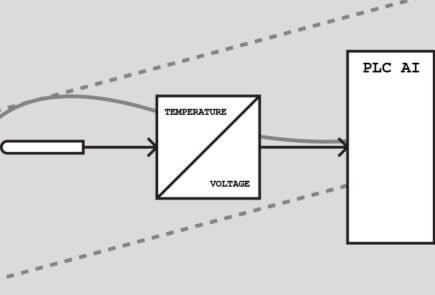