Why You Should Use Normally Closed For Stop Buttons

I have been asked by many of you to explain the use of normally open and normally closed logic when working with PLC programming.

Recently, I wrote an article containing a collection of ladder logic examples, but one of the examples made some confusion. In the start/stop circuit made with ladder logic I used a normally closed contact in the ladder logic.

But, I realized that I’ve made a mistake.

Some of you noticed that in order to make this example follow good practice, I should use a normally open contact in the ladder logic, and a normally closed contact as input actuator. By doing so, the input will be not produce hazardous situations under failure. Important when it comes to the risk assessment process. The same is also true with safety relays and contacts in safety circuits.

To explain this further I will divide the PLC logic into two parts. At last I will show how you should merge the two:

Let’s begin with some digital inputs and some actuators to connect to these.

But the digital actuators can not only have two states. They can also have one of two functions:

The difference between connecting normally open actuators and normally closed actuators to a digital input is when you activate the actuators.

Take these two rules and remember them. This is the difference between normally open and normally closed:

This can also be illustrated in a table:

Normally closed actuators has the opposite effect on the state of the inputs they’re connected to compared to normally open actuators.

When you are developing a PLC program you will also be using logic. But instead of hardware logic with actuators you will now have ladder logic contacts or boolean instructions.

This is often where some confusion occurs. Because this other type of logic looks very similar to the hardware logic. In fact, the PLC programming language ladder logic is made to look like electrical circuits.

Just like the input actuators you have both normally open and normally closed contacts available in PLC programming. Often they are referred to as examine if closed (XIC) and examine if open (XIO).

The ladder logic symbols look almost like the electrical symbols for normally open and normally closed contacts, and the function of these are the same. I can even plot the same table, but this time for the PLC logic:

At last a column containing all the results of the boolean instructions. The result is what comes after the instruction in your ladder diagram. If you have a coil connected after the bit logic instruction, the result column will be equal to the state of that coil.

The difference between examine if closed and examine if open is that they are inversions of each other. In Function Block Diagram programming inverting a signal is done with negation.

The state of each PLC input is represented by the value of a bit in PLC memory.

Let’s move back to the start/stop example, which is really just a latch of a coil with an instruction to break the latching.

Here’s an illustration of how the whole system would look like, including both hardware and software:

Notice that I use a normally open contact as input actuator, even for the stop button. This is because I’ve already used normally closed logic in the software.

When the input actuator is activated, the input bit will turn ON or 1. But in my ladder logic I’ve used an examine if open instruction and given it the address of that input.

As you can see in the table above, the result of an examine if open instruction will be 0 if the input is 1.

This is good because in the ladder logic, the instruction has to break the connection and thereby the latching of the output.

But, since the state of the input has to be 1 to break the connection (result 0), the input actuator has to turn the input ON or 1 when activated.

In the table with input actuators above, you can see that a normally open contact will change the state of the input to 1 when activated. In that way, you can use the two tables to choose between normally open and normally closed logic.

But this is not good practice.

What Is The Difference Between Normally Closed And Normally Open Inputs?

Let me explain that a little further.

How could a circuit like the one in the example with just 2 inputs fail?

What if one of the wires broke: Now, the stop button (the normally open contact) will have no function when the system is failing (wire-break). The wire break is one fail, but that produces another fail: The stop button isn’t working. And since the stop button is a critical function, this is why this solution is not good practice.

How could this solution be good practice?

This means, that for the stop button to work as in the previous example, the boolean instruction should now be examine if closed instead of examine if open. If you, once again, look at the table you will see that. Stop actuator activated. Input is 0 and so is the examine if closed.

At last you might wonder why I didn’t do the same thing with the start button. That input is also a normally open contact, but with examine if closed (normally open logic) in the software.

Just like that stop button, the start button will not work if the wire breaks.

Why is the start function not a critical function?

Because it is not dangerous if the machine, motor or another movable part cannot start.

To develop you PLC program with what’s known as good practice, you should always keep in mind what will happen when the system is failing. Your system can fail in many different ways, but often the critical one is wire-break.

Wire-break often occurs because wires are the weakest point in a typical PLC system. Wires often go along movable parts, and are therefore exposed to a risk of being cut or ripped apart.

Another very common fail, that behaves in almost the same way as a wire-break, is loose connections. All your inputs are connected with wires. The weak points here are the connections. From the input screw-terminal on the PLC to the terminals on the input actuators are all in risk of being loose and creating a bad connection. Sometimes even no connection, which is just like a wire-break.

Do you know about other common fails, that can cause risk in a PLC program?

Join the conversation! Please leave a comment below and tell us your perspective on good practice machine design. 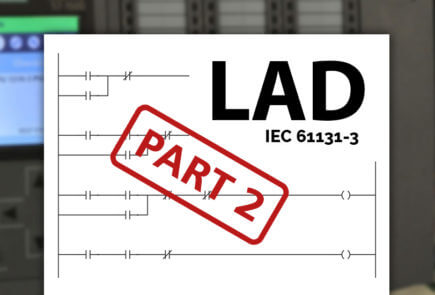